The story line at the sharp end of the fleet on Day 4 of the Rolex New York Yacht Club Invitational Cup was much the same as on Day 3. San Diego Yacht Club played from in front, starting fast and stretching away to another two wins. For those keeping score at home, that’s four consecutive wins across two very different race arenas for Tyler Sinks and crew. Meanwhile, Southern Yacht Club’s crew showed again that no one can work out of a jam quite like they can, turning a potential clunker into a ninth, and following that up with a lunch-pail second.

When the dust cleared from a very challenging day on Narragansett Bay’s East Passage, Southern Yacht Club remained the overall leader, with a nine-point advantage over second place, which is now occupied by San Diego. Royal Thames Yacht Club sits third. And that’s the extent of the teams with a realistic shot at the championship, though Royal Cork Yacht Club and the host New York Yacht Club shouldn’t be ruled out for a podium.

“It really comes down to technique and working together as a team,” said San Diego tactician Jake LaDow, when asked about the team’s speed advantage over the past two days. “That [includes] weight on and off the rail, loading the boat up, and really fine tuning the sail trim. That’s been what we’ve been getting better and better at. In these really tight races, you need these two-foot crosses every once in a while. The first couple of days, our speed wasn’t as good as it is at this point in the regatta, and we had a couple of unlucky breaks. Sometimes you need those small victories throughout the race to really punch through and allow your race to free up.” 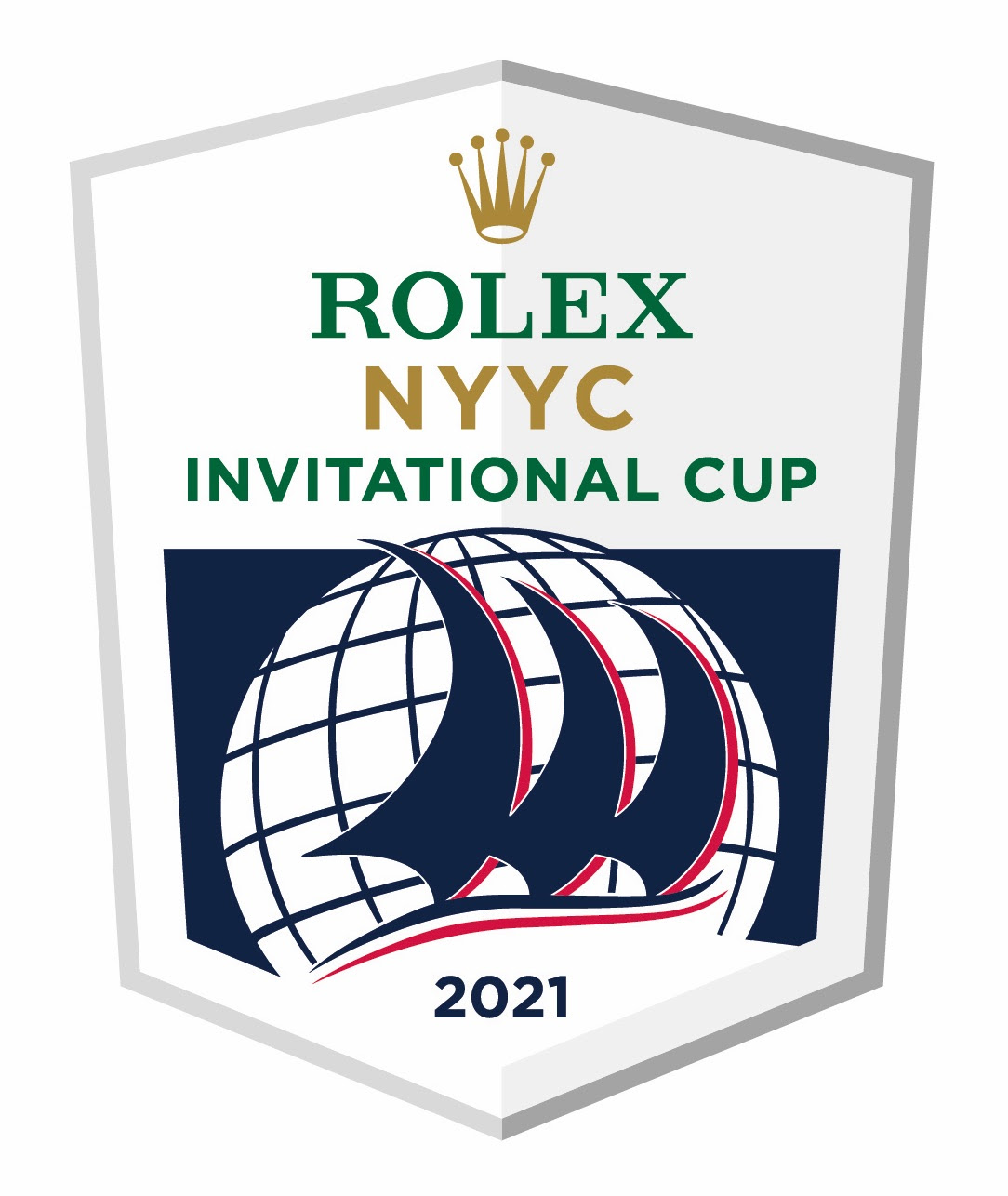 The Rolex New York Yacht Club Invitational Cup is a biennial regatta hosted by the New York Yacht Club Harbour Court in Newport, R.I. Since the event was first run in 2009, it has attracted top amateur sailors from 48 of the world’s most prestigious yacht clubs from 21 countries. After five editions in the Swan 42 class, the 2021 event will be the second sailed in the IC37, designed by Mark Mills. The strict one-design nature of this purpose-built class combined with the fact that each boat is owned and maintained by the New York Yacht Club, will ensure a level playing field not seen in any other amateur big-boat sailing competition. The regatta will run through Saturday, September 18, with racing starting on Tuesday, September 14. A live broadcast on Facebook and YouTube, starting on Wednesday, September 15, will allow fellow club members, friends, family and sailing fans from around the world follow the action as it happens. Nineteen teams from nine countries will compete in 2021.

After a punishing day on Rhode Island Sound on Thursday, the Race Committee moved the fleet inside Narragansett Bay, north of Gould Island. The flatter water and more moderate breeze was a welcome change for many competitors, but what today’s conditions lacked in physical challenge was more than compensated for on the mental side of the sport. The breeze was shifty and puffy, and the tide was a factor, and few teams were immune to a bad race. In fact, of the top seven teams to begin the day, Southern and San Diego were the only two to avoid at least one double-digit finish.

San Diego stuck with a similar playbook to yesterday, starting at the pin and using superior speed to jump into the lead. Southern, once again, had to battle, particularly in the day’s first race. 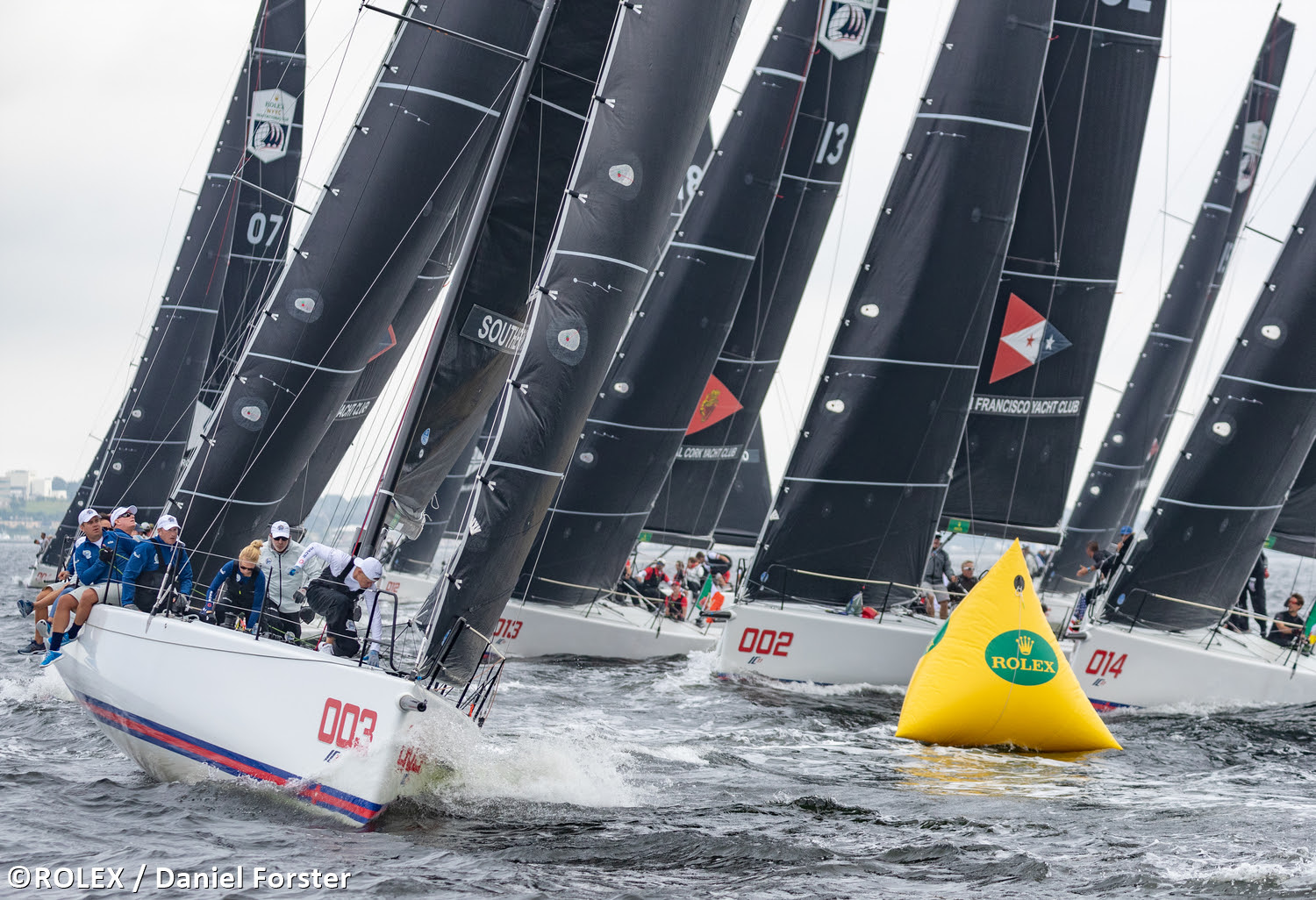 “We had a pretty decent first beat and rounded the weather mark in about sixth and everyone in the lead pack bore off initially on starboard,” said Rick Merriman, Southern’s main trimmer and a two-time winner of the Rolex New York Yacht Club Invitational Cup. “The boats behind all jibed and got a jump on everyone. We went to jibe back, and there was a starboard tacker that pushed us to the right, and by then we’d pretty much lost everyone. We tried to keep our attitude strong and keep moving. We know we’ve got decent speed, so we just hung in there on the second beat and the run, kept passing boats and got in the top 10 again.”

A second in the second race salvaged a very solid day, which will send the Southern Yacht Club team (Bow 3) into the final two races with a solid, but far from unsurmountable advantage.

Behind Southern, it was tough sledding for many top teams. Eastern, New York, Royal Cork, and Royal Canadian all saw their dreams of a podium, if not a win, take a significant hit.

Of the 19 teams in the regatta, just five put together two single-digit finishes on Day 4. The San Francisco Yacht Club, which has shown flashes of speed in multiple races, had a fifth and a fourth. The other two teams were more surprising. 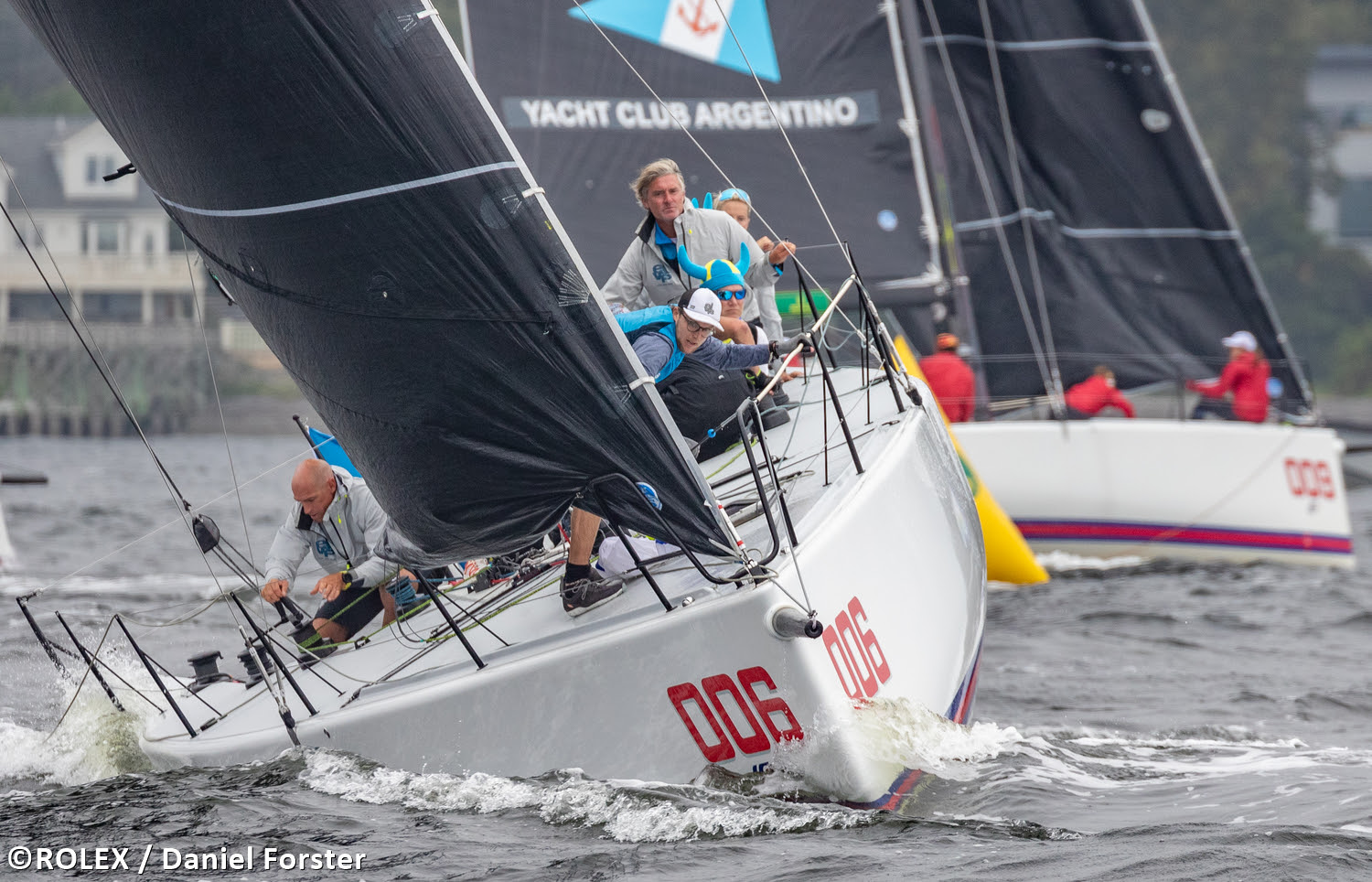 dish Yacht Club (Bow 6, at right) recorded its best two results of the regatta, a sixth and a seventh, and moved from 14th to 11th.

“I think the main reason was the starts,” said tactician Johanna Sommarlund. “We got off the line today finally. We’ve been trying to find a way for the timing for the acceleration. We finally got that right today and then we played the shifts on the upwind.

“We’ve been trying some different things, working on, OK, let’s turn a little bit earlier, don’t think about the bias, just get clear air. Today we finally found the recipe to get off the start.”

Then there were the viking hats. The team broke them out for Thursday evening’s Lobster Bake, and at least one crew member decided to wear it on the water today.

“Some people say it’s bad luck to wear hats during the race,” she said. “But apparently it’s been really good for us. We’ll be quicker with the viking helmets [tomorrow].” 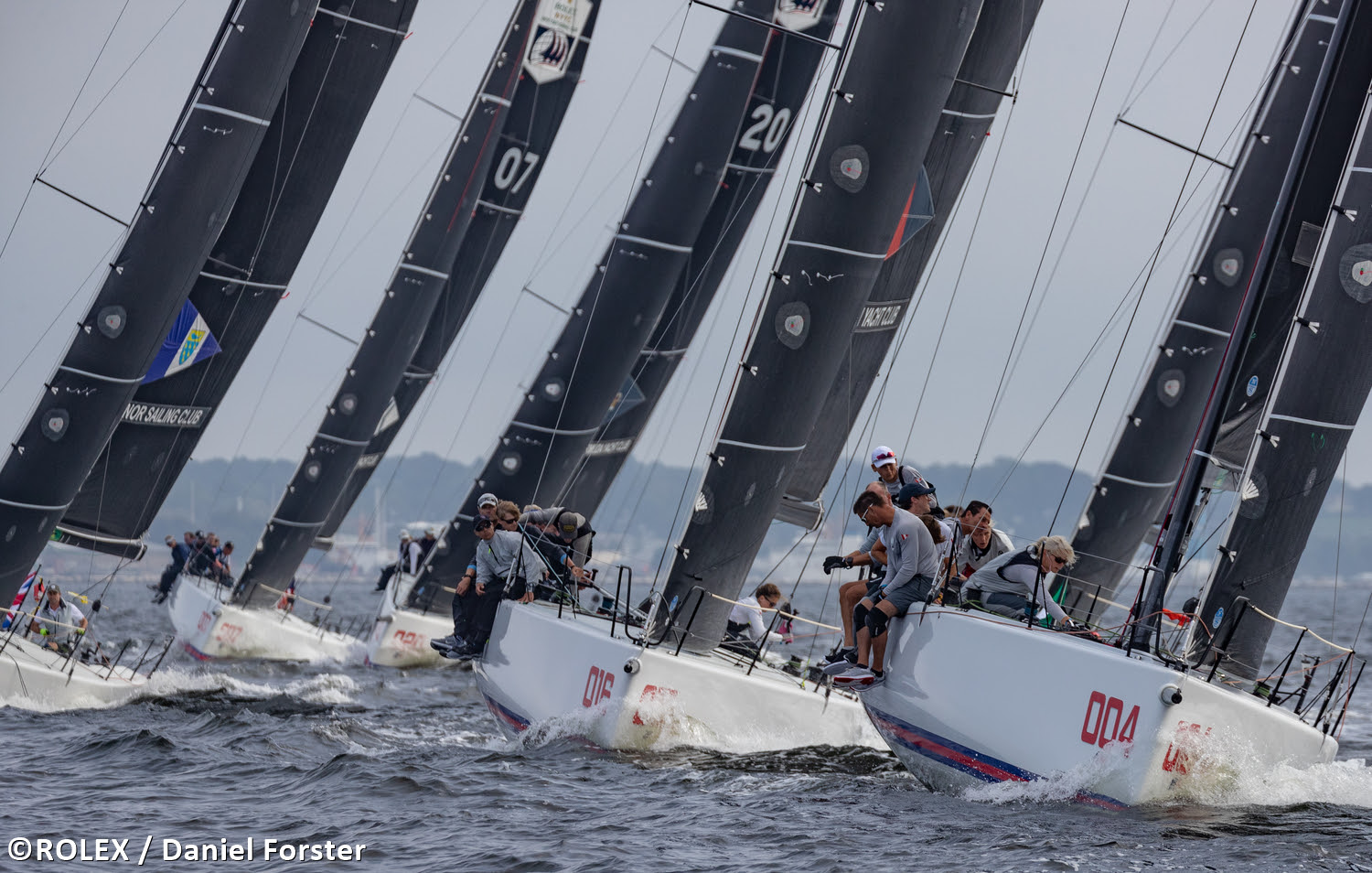 Howth Yacht Club (Bow 4, at left) also had its best two results today. Tactician Laura Dillon also chalked it up to trying something new. In the case of the Irish team, it was more input from the regatta’s youngest participant, 15-year-old Rocco Wright.

“Rocco was feeding a lot of imput today, and it was really helpful to have those extra pair of eyes looking around,” said Dillon. “We definitely found today that the waves were less and we had good enough boatspeed across the course, so it was much more about the shifts and the gusts. That definitely helped level the playing field.

“We’re really enjoying the event, and it’s showing as we’re getting better every day.”

Howth currently sits 16th in the regatta, but Dillon and her teammates were smiling wide tonight in the tent after racing and eagerly looking ahead to more progress over the final two races.

“A steady gain is really good,” she said. “If we’re ending on a positive trajectory, then we’ll be hopefully looking forward to, in the future, coming back and continuing on that upward trajectory. We’d all love a podium position, but a steady gain would keep us all very happy.”

Like Newport Buzz? We depend on the generosity of readers like you who support us, to help with our mission to keep you informed and entertained with local, independent news and content. We truly appreciate your trust and support!

Voted Best Blog in Rhode Island (RI Monthly's Best of RI)
Use #NewportBuzz to get your best pics reposted.

Molly Falconer de Ramel, who with her husband rais

You’re invited! @newport_curates invites you to

Heads up! Hocus Pocus 2 is expected to shoot in Ne

This Subway worker in Rhode Island deserves a billion years in jail!

Type to search or hit ESC to close
See all results